This industry has provided me with the following opportunities:
🛩I work and travel to different destinations.
🛩Immersion in various cultures-live inclusiveness and diversity.
🛩Mindset expansion: becoming a better human being by studying and broadening my worldview.
🛩Creating long-lasting goals for others and cultivating meaningful relationships.
🛩It opened my heart and allowed me to pursue ambitions I never imagined were attainable.

The Julian Star® is the most distinguished service award in the global hospitality industry. The award is issued by the International Hospitality Institute (IHI).

The Julian Star® (also known as the “J Star”) recognizes hospitality establishments and practitioners that are delivering differentiated, and discerning service to their customers. IHI believes that customer service, at its best, should be intuitive, emotive, and imaginative.

The Julian Star® is named after Saint Julian, the patron saint of hospitality. Winners of the Julian Star® will exemplify the spirit of compassion and humility in their dealings with customers, and a servant leadership approach in their interactions with co-workers. Unlike some industry awards which focus on the amenities, luxury level, and location offered by hospitality establishments, the Julian Star® rates only the quality of customer service delivered by hospitality establishments and the customer service competency of practitioners. 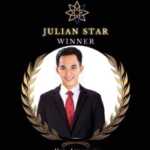